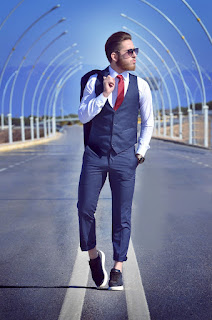 The culture of dress and elegance of appearance has become a science taught in special courses, as part of the skills of communication and communication with the environment, as is the case in the tone of voice, manner of speaking and other skills that are basic and necessary in any successful person plan. Where personal communication and leadership skills expert (Zain Ghanma) shows that a person's first impression of the opposing party depends on what they see, and that the first impression is made by the dress and general appearance, then behaviors and actions reinforce the first impression. Ghanma adds that a person should have wisdom and logic and think well about the image he wants to give of himself and would like to leave it in people's minds. "The way we choose clothes says a lot about us." In general, a person with social intelligence can choose the appropriate dress for the right place according to the sheep, noting that it is not acceptable, for example, for a person to go to a game wearing a formal suit , or for a person to attend a wedding with worn jeans and a T-shirt. And do not neglect (sheep) the need to pay careful attention to detail for cleanliness, fragrant smell and cleanliness of teeth, because a small part can affect the overall shape and harm the desired image. How strange I feel when I walk among the commercial shops in the market district (Estley) of the capital, Nairobi, with black spots or worn-out trousers that I haven't even taken for free, as good as I would buy them, and what is worse than that if the pants mentioned in the list of expensive clothes that only the middle class can buy as a new fashion. The phenomenon of wearing worn and patched clothes below or sometimes above the knee is something striking among young people, and it can sometimes become unintentionally egalitarian between the rich and the poor. charming. Clothing patches have become a modern fashion which has gained a lot of popularity in recent times, as fashion houses have released patchwork garments at the pockets or sleeves in different and various designs, and the concept has become the more qualitative and most in accordance with modern fashion, it is necessary to wear worn clothes and at the same time not to cover even nudity. Observers and experts believe that the issue goes beyond the desires of young people, but rather sees these desires as a result - not a reason for the question of young people's enthusiasm for targeted fashion, what about magazines, programs and websites; Who presents the latest in all fashions for young people, and desires them, so that fashion news rivals the hottest news in conflict zones. But when it comes to fashion and fashion, many men and women fail and fail this test, knowing that what matters is the first impression you leave on others, and that happens. sees from your first interview or meeting with your manager or anyone else, the first image or first impression makes sense. I have the other person and it stays in our minds. There is a widespread belief that precious clothes are synonymous with elegance, and this is a bigger mistake. International brands are not synonymous with elegance at all, but taste in the choice of clothes, for example, if you buy an expensive navy-colored jacket and then wear worn-out jeans with it, in addition to being Marca, you haven't progressed in the world of elegance. Jeans remain one of the most interesting pieces of clothing over time, especially for women, because this type of clothing creates an emotional connection with the woman who wears it. Kara Nicholas, of the historic Con Denim Factory, says: “Jeans are very personal due to their color, so once you start wearing them it has an impact on your personal makeup. It's something you wear over time that takes on body and personality. These are the ordinary jeans with no patches, so what if the jeans worn by this woman have large piercings at or above the knee, then there is no doubt that creates or stirs passion or the sexual instinct.